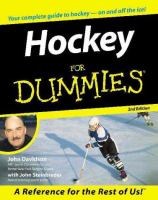 "Gives die-hard fans and newcomers to the sport the inside edge!"
- Scotty Bowman , NHL's winningest coach and  former coach of the Detroit Red Wings

"Nothing gets by John Davidson. If the first edition didn't already make you a fan, then this edition will!"
- Mark Messier , NHL All-Star

"My dog, Blue, and I ran out to get Hockey For Dummies, 2nd Edition . We give it two paws up!"
- Don Cherry , former NHL coach and "Coaches Corner" commentator for Hockey Night in Canada

" ... the most comprehensive, easily understood source of hockey history and instruction I've ever come across. Not only was 'JD' a superb player in the NHL, he is also an extremely skilled commentator sharing his knowledge of the game with fans all over North America. From hat tricks to power plays, Hockey For Dummies provides the reader with the wisdom of an expert. -From the Foreword by Wayne Gretzky

This updated edition of the bestselling guide to all things hockey is packed with illustrations and play-by-play descriptions, diagrams, and photos of the NHL's greatest players. It tells you how to:

Former New York Ranger, John Davidson offers you plays only the pros know and tips for playing hockey at any level. And he fills you in on:

Hockey ABCs, its origins, positions, gear, rules, and more The complete NHL-explores the various leagues, greatest players, training, and tons of fascinating facts, figures, and priceless trivia The best ways to follow the game from the stands or on TV How the pros do it-includes tips from Gretzky on passing, Messier on winning face-offs, and other star players on how to play like a pro

From youth leagues to the secrets of the NHL greats, Hockey For Dummies , is your total guide to this cool sport.

There are no comments for this title yet.

There are no ages for this title yet.

There are no summaries for this title yet.

There are no notices for this title yet.

There are no quotes for this title yet.

Find it at CAPL